Struggle Behind IDSP's Creation
The Idea for Creating IDSP
Why IDSP
IDSP's Model of Change
Causes We Support
Recognition, Certifications, Standards and Capacity

The Story of Dr. Quratulain Bakhteari:

Quratulain Bakhteari grew up in a refugee camp on the outskirts of Karachi after the creation of Pakistan in 1947. When Quratulain was earning her B.A. degree as a student between 1978 and 1982, she worked as a volunteer, organizer, and researcher in the squatter settlements in and around Karachi. She made major contributions both to public health and sanitation during this time, providing toilets to 5,000 households through community actions, effectively changing the sanitation and hygiene practices for more than 35,000 people from 1979 to 1987. After completing her B.A. degree, she helped new refugees coming from Bangladesh by providing them with access to basic health care and education. Later, she earned a master’s degree and Ph.D. and established 2,000 government girls’ primary schools in rural Balochistan, resulting in the enrollment of 200,000 girls — a record in Pakistan’s history.

Frustrated with a lack of efficacy in internationally sponsored development projects, she wrote a concept paper that became the blueprint for Institute for Development Studies and Practice (IDSP), and was subsequently funded by The Asia Foundation for three years. She formulated the curriculum, recruited, and trained faculty in advance of the formal launch of IDSP in 1998.

Since then, she has focused her attention toward safe spaces for young people in Pakistan, and IDSP has set a major strategic goal of establishing a university of its kind in the field of community development in order to work with marginalized youth for a greater social, political and economic change in societies. Currently, IDSP is designing its university curriculum and faculty development trainings in conjunction with the campus construction in Quetta. Quratulain is an Ashoka Fellow and has spoken at prestigious conferences, including the Global Philanthropy Forum and TEDx.

The Idea for Creating IDSP

INSTITUTE FOR STUDY AND PRACTICE OF DEVELOPMENT

What is the problem to be addressed?

The institute work oriented with theory and philosophy behind it.

Structure of the institute:

The Issues we address
Pakistan has the fourth-largest population of South Asian countries, and 70 percent of the population is below 30 years of age, according to the Pakistan Bureau of Statistics. Almost 80 percent of these young people are excluded from meaningful educational opportunities. In the nation’s poorest and ignored province of Balochistan, 68 percent of students do not complete primary school.

Pakistani youth aspire to participate in community leadership and social change, but due to lack of necessary knowledge, skills, and safe environments, they are unable to achieve these aspirations. Family is the most important unit of Pakistani society, considered the first institution of learning and socialization for youth. However, family units have been largely unrecognized, isolated, and ignored by educational institutions and development programs. Without proper attention to strengthening family units, domestic violence, child labor, early child marriages, gender based inequalities, illiteracy, maternal and infant mortality, and honor killings have reduced the efficacy of youth to be active contributors to their society. Communities overlook their role in poverty reduction and social development, and local governments are not engaging the country’s legislative process to effect policy changes geared toward youth opportunity and development. Despite a mandate in the Constitution of Pakistan to provide free and compulsory education to all children between 5-16 years old, only 66 percent of children in this age group regularly attend school and literary rates for the population hover around 57 percent. Furthermore, mainstream media groups support the agendas of corporate interests over issues of social and economic welfare. These groups have fueled civic differences, isolation, disharmony, and violent resistance movements in various part of the country.

Together, these conditions rapidly breed extremism and terrorism, and over the last few decades, Pakistan and surrounding countries have faced the phenomena of rising militancy and intolerance. A survey asking young Pakistanis for their motivations in committing acts of violence found that 42 percent engaged in violence to escape from poverty, 24 percent did so because they want money, 17 percent did so to defend their own honor and that of their family, and 12 percent did so because they are unemployed.[i] Various developmental, educational, and political institutions that are intended to direct the collective energy of the country’s youth in a productive manner have displayed apathy to fulfill their responsibilities. Therefore, while these populations are normally considered a huge asset to driving forward the development of a given state, they are considered a hindrance rather than a driving force for Pakistan’s national development.

[i] Next Generation Voice Report of British Council, 2014

Our Vision
Politically socially and culturally aware individuals that will create interdependent, self-reliant societies that guarantee and acculturate dignified living for all

Our Mission
To Nurture and Develop Individuals and Communities, that will Change the Power Structures by Demystifying Processes of Education and Development and Generate Value based Partnerships and Practices at all Levels”.

Our Strategy
To create a critical mass of young, vulnerable and excluded people by…

1. By nurturing and developing their potentials as young leaders for change.
2. And developing their communities by engaging them in the practices of demystifying the processes of education and development.
3. Thus creating a critical mass of knowledgeable and well practices young community leaders, who will eventually mobilize forums, movements for structural and policy changes through democratic, non-violent and rights based actions.
Our Goals.

IDSP adds value to Pakistan society by building a large network of young Pakistanis who are enrolled in practical educational programs and who are empowered to influence their peers, families, communities, and governments to promote positive social change. Through its six-year learning and practice methodology, IDSP enables Pakistani youth to build on their innate abilities, and practice their career skills to become leaders and generate positive influence on society over time. More than 185,000 youth and young Pakistani have graduated from various IDSP programs, and IDSP is holding forums of graduates to convene them and mobilize them to promote ideas of entrepreneurialism and positive social change in all they do. 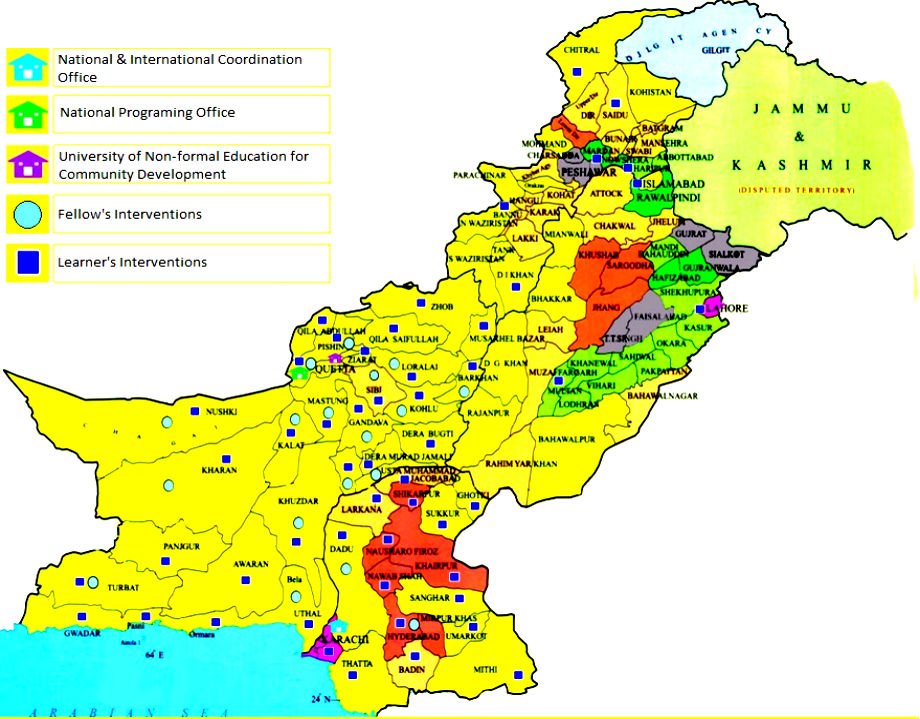